Six people were killed and 37 injured – some of them critically – after a female suicide bomber set off a bomb on a bus in Volgograd – the former Stalingrad -, central Russia. Local authorities have been put on high terror alert for the next 15 days.

Volgograd, formerly known as Stalingrad, is an important industrial city and the administrative center of Volgograd region. The city spans some 80 kilometers along the Volga River in the South of Russia. At the present time more than 1 million people live in Volgograd.

“Today at 2:05pm Moscow time [10:05 GMT] in Volgograd inside a bus, as a result of an unknown explosive device going off, a blast happened, leading to casualties,” a national Anti-terrorist Committee representative said in the statement. Forty passengers were on the bus. At least eight of them are in critical condition. A 20-month-old toddler is among those injured. His state is assessed as moderately severe.

Russia’s Health Ministry indicated that most of the victims in the explosion sustained mine explosive-type wounds, caused by the bus’s paneling and the shattered glass.

Russian Prime Minister Dmitry Medvedev has instructed the Emergencies Ministry and the Ministry of Health to provide all the necessary help to the victims of the blast. An Emergencies Ministry plane, with medics and five special medical units on board, has arrived in Volgograd to help treat the injured.

A three-day mourning for the victims of the terrorist attack has been declared in Volgograd Oblast.

AN EYEWITNESS OF THE TERROR ACT …

A young man named Ilya, an eyewitness of the terror act, who was in a different bus on the same route, described the scene of the blast to RT: “First I saw a lot of pieces of broken glass scattered all over the driveway [road]… There definitely was an explosion in [the bus] as its windows burst outside sending glass to a considerable distance, but with no fire outbreak… There were a lot of police there and also people who had been just driving by and stopped to help the victims, they were bringing med kits with them. There were people from the emergency service at the scene helping the injured, but I saw a woman sitting inside the bus. She was covered with blood and I couldn’t make out whether she was alive or not. She was just sitting there.”

According to Ilya, lots of students use that bus route, as it stops at Volgograd State University, and there were apparently some students at the scene of the blast. The bus also passes the local Cardio Center, he said, adding that some heart patients might have been there too.

A relative of one of the surviving passengers told Echo of Moscow radio the explosion went off in the middle of the bus aisle. There were a lot of youngsters on the bus at the time of the blast, he said. Witnesses reported that the front part of the vehicle was heavily damaged, and that the nearby cars had their windows broken.

The Investigative Committee has identified the woman who was the suicide bomber behind the blast: it’s allegedly Naida Asiyalova, from Dagestan (Russian Caucasus). The preliminary information indicates that “the female suicide bomber recently converted to Islam, and was the wife of a militant leader,” an Investigative Committee representative told the media. Also, a grenade has been found under the vehicle and it’s now being checked whether the explosive is live, a source in the security forces now at the scene told RIA Novosti.

According to information obtained by LifeNews from security sources, the suicide bomber, Asiyalova, earlier recruited a young Muscovite, Dmitry Sokolov, who became a skilled bomber respected by Islamist militants. Sokolov, now known as Abdul Jabbar, is wanted in Dagestan for taking part in two terrorist explosions, in which at least 29 people were injured, the media added.

Following the blast, local police cordoned off the scene and ordered all movement of minivan buses in Volgograd to be halted. A kilometers-long traffic jam has formed in the area. Bomb technicians and investigators thoroughly searched the scene. Criminal investigators from Moscow have also been called to Volgograd, according to Russian Investigative Committee spokesman Vladimir Markin. Volgograd authorities have also been put on high terror alert for the next 15 days.

Earlier, the malfunction of gas equipment inside the bus was listed as one of the possible causes of the blast. However, investigators soon indicated a terrorist act was the preliminary cause. The transport company which owned the bus said that the vehicle worked on diesel fuel, and there was no gas equipment on board, a statement on the local governor’s website later confirmed. 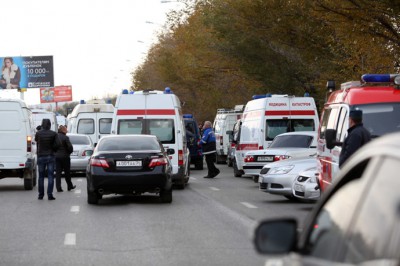