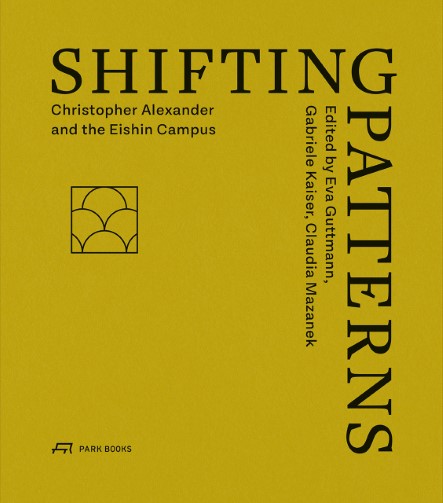 Christopher Alexander is a Vienna-born, British-American architect and theorist and the father of the pattern language movement, popularized in his pivotal 1968 book, A Pattern Language, with Sara Ishikawa and Murray Silverstein, as well as the 1979 follow-up, The Timeless Way of Building. Lesser known but as essential to understanding Alexanderʼs work is his theory of “systems generating systems,” which explains that systems as a whole are created by “generating systems,” and, if we wish to make things which function as ‘wholes,’ we shall have to invent generating systems to create them.

Taking the Eishin Campus outside Tokyo, built between 1983 and 1989, as its example, Shifting Patterns is the first book to examine Alexanderʼs theory of “systems generating systems” and its application to a building design. It brings together essays from an interdisciplinary, international cast of experts, including Eva Guttmann, Gabriele Kaiser, Ernst Beneder, Walter Ruprechter, Hisae Hosoi, Christian Kuhn, Ida Pristinger, and Norihito Nakatani, as well as conversations with Hajo Neis and Takaharu Tezuka to investigate the application of this theory to the school and university complex, the largest project Alexander has realized based on pattern language. Among the issues discussed are topicality, interdisciplinary and internationality, and culture transfer. The essays also look at the design-build movement as an antithesis to todayʼs standardized and commerce-driven architectural production.

EVA GUTTMANN is a freelance architecture publicist based in Graz and Vienna and an editor with Park Books.

CLAUDIA MAZANEKis a Vienna-based freelance editor with a special expertise in twentieth-century art and architecture.